Everything you need to know about Intrauterine Insemination (IUI) in 2021

Are you struggling with infertility? We’ve compiled everything you need to know about intrauterine insemination, commonly known as IUI, which is the first line of treatment for many people who are trying to conceive. 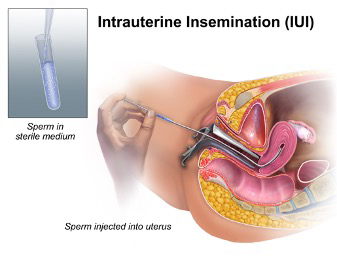 IUI is a fertility treatment that uses drugs to stimulate the ovaries and slightly increase the number of eggs produced. Then, concentrated and washed sperm is placed inside the uterus through a thin catheter during the time of ovulation, bypassing the cervix.

What’s the difference between IUI and IVF?

IUI is much less expensive and less invasive than IVF.

When do you need IUI?

Most patients who choose IUI have unexplained infertility. This is a diagnosis for people who have been unsuccessful conceiving despite a lack of obvious cause. Ovulation is occurring, the tubes are open, and the sperm count is normal.

A small category of patients who choose IUI are those with problems of the cervix, such as scarring from previous surgery. This is usually apparent from their medical history and pelvic examination.

Ovulation induction for anovulation and IUI

IUI is generally not the best treatment for patients with abnormally low sperm count, with success rates of less than 10%.  If the number of total motile sperm is very low, IUI simply cannot work, and is best discussed with your physician, who may advise a different type of fertility treatment. IVF with ICSI tends to be very effective in these situations.

Couples who have unresolved erectile dysfunction on the part of the male or inability to ejaculate intravaginally can have high success rates with IUI.

The most common use of donor sperm is for lesbian couples who wish to have a child. A combination of ovulation induction and intrauterine insemination is utilized, along with high-quality donor sperm.

This same treatment can be applied when a man has totally absent sperm. It can also be appropriate for cases in which a man who has a genetic disease wishes to avoid passing on to his children.

IUI is not recommended in some situations

A history of chlamydia or pelvic infection suggests that pelvic adhesions, which are filmy scars, may be present. Previous ectopic pregnancies also warn that the tubes may be the problem. IUI can’t work if the tubes are not picking up and transporting eggs properly.

If laparoscopy has been done and endometriosis has been discovered, IUI may be an appropriate fertility treatment. However, advanced stages of this disease involve adhesions, which are a barrier to IUI success.

Women who have low ovarian reserve or advanced age should consider bypassing IUI and moving immediately to IVF.

The Process of IUI

Intrauterine insemination is a fairly simple fertility treatment. At the start of the cycle, during the period, an pelvic ultrasound is performed to ensure the ovary is free from cysts.

Oral medications clomiphene (Clomid) or letrozole (Femara) are administered for five to seven days, sometimes along with injectable gonadotropins, to stimulate ovulation, hopefully resulting in the production of multiple follicles and eggs.

Typically, around day 10 of the cycle, another ultrasound is conducted to check the development of the follicles in the ovaries. Each follicle has an egg, and their growth rates differ. Your clinician will be watching for follicles that are above 15 mm, because they are responsible for ovulation. Once the largest follicles are 18mm to 24 mm, it is deemed the ideal time for ovulation.

At that time, a “trigger drug” called hCG is administered by injection at home, and ovulation will occur approximately 36 hours later. IUI is timed at 24 to 40 hours after the injection, starting with the collection and evaluation of semen.

The semen sample is diluted in special media for sperm washing to eliminate bacteria and toxic chemicals such as prostaglandin, which are normally present in seminal fluid. Then the concentrated sample of sperm is assessed under the microscope. The washed sample is identified and labeled. The sperm, along with a small amount of fluid, are placed with a tiny catheter into the uterus to facilitate conception.

After IUI, it is advisable to continue a healthy lifestyle. You can continue with your daily routine activities such as work, exercise, and sex.

Does Intrauterine Insemination work on the first try?

Sometimes. Your clinician will likely advise you to plan on three to four cycles of insemination to achieve conception.

Let’s compare results of IUI to no treatment. Women with unexplained infertility typically do not have absolute infertility. That is, some of them are going to conceive each month without any further medical treatment. However, the incidence can be low, often under 5% per month. These patients can increase their chances of conception to about 18% per cycle by undergoing IUI treatment. This compares favorably to patients who have normal fertility, who have approximately 20-25% chance of conceiving every month.

IUI success depends, to some extent, on how the patient responds to the drugs, which hopefully produce multiple follicles. IUI success rates per cycle vary according to the age and ovarian reserve of the woman, with male fertility as an additional factor.

To have a reasonable chance of conceiving with IUI, a typical patient should plan on completing three cycles. Another positive way of thinking about this is three cycles of IUI can be as successful as one IVF for a particular woman.

Interestingly, using the drugs alone or performing IUI with no medication accomplishes no measurable benefit.

Natural cycle IU requires little monitoring. In this type of cycle, LH predictor kits are used to determine when ovulation will take place, and an insemination attempt is timed accordingly. An ultrasound can be performed between 11 to 14 cycle days to check whether a mature follicle has developed. The drug hCG is injected by the patient at home to facilitate ovulation.

This regimen is usually limited to young women doing donor insemination, as it avoids the risk of multiple pregnancies. After the injection, IUI treatment is scheduled.

This approach is used sparingly due to the high possibility of twins and high-order multiples (pregnancies with more than twins). Because triplets or more are always born premature, this risk is carefully discussed between the patient and the physician.

In gonadotropin cycles, an ultrasound is performed again to check for the presence ovarian cysts. Once cystst are confirmed absent, the patient receives an injectible medication, later followed by several ultrasounds to ascertain the growth of mature follicles.

The production too many follicles and high multiple pregnancy risk are the main drawbacks of gonadotropin cycles. These might lead to the cycle termination or immediate transition to IVF.

How many times should IUI be done?

Typically, intrauterine insemination is performed for a maximum range of about three to four months in women who are releasing eggs on their own accord. However, for women who have problems with their ovulation, a reasonable period to attempt IUI is up to six months.

What is the risk of twins with IUI?

The twin risk with oral medication and IUI is approximately 10%. This is much higher than Mother Nature provides at approximately 2%. Because of the multiple eggs that are produced with IUI, there is a risk of having more than one baby. The risk of triplets is 1% compared to the natural risk of one in 50,000.

Because IUI involves the risk of high-order multiple pregnancies, it’s important to talk with your fertility doctor about this and carefully consider the risk before initiating a plan for IUI.

Other risks of IUI

Clomiphene can cause headaches, spots in the vision, and other side effects. After treatment, there may be persistent enlarged follicles which cause a cyst. Letrozole has fewer side effects and leads to lower numbers of follicles, but success rates are about the same as Clomiphene.

Gonadotropins can cause a complex syndrome known as hyperstimulation of the ovaries. This risk is mostly a threat in patients with polycystic ovary syndrome, but can occur unexpectedly.

Because the IUI specimen cannot be totally sterilized, there is a possibility of transmission of bacteria into the uterus and the tubes. This is quite uncommon, but if you have a fever after an IUI procedure, you should notify your provider immediately.

Because of the risk of transmission of sexually transmitted infections (STIs), screening is required for gonorrhea, chlamydia, hepatitis B and C, and HIV. These should be performed on an annual basis.

IUI involves stimulation of the ovaries and timed placement of washed sperm into the uterus. It is the first line of treatment for several causes of infertility. The principal risk involved in this type of fertility treatment is multiple pregnancy. Since the physical stress, emotional stress, and cost are significantly less than with IVF, many couples who are trying to conceive go through rounds of IUI successfully. Those who do not succeed then consider IVF.

As a well-known pioneer in IVF, Dr. Joe Massey loves to share in the joy of helping build families. Dr. Massey’s achievements in fertility medicine include involvement in the first pregnancy in the world following assisted hatching in 1988 and in the world’s first pregnancy following intracytoplasmic sperm injection (ICSI) in 1993. He has led a number of clinical trials and co-authored many articles published in medical journals.

Navigating Infertility During the Holiday Season

As the year’s drawing to a close, the decorations are up, and people are gathering and exchanging gifts. But if you and your partner are

What Are Multi-Cycle IVF Plans and Are They Right For Me?

Choosing to undergo fertility treatment to get pregnant is a big step. Once you’ve decided to go this route, there will be some important decisions

How to Understand Insurance for Fertility Care

Thanks to in vitro fertilization (IVF), countless individuals and couples across the world have more access to family-building opportunities than ever before. However, IVF and

Three Questions to Ask Yourself About Affordable Fertility Treatment

One of the top priorities of individuals and couples seeking to grow their families through assisted reproductive technology is managing the costs of fertility care.